This January, Grace and I joined with ITEC and some Brinkman Adventures fans to enter the Ecuadorian jungle to meet the legendary Waodani tribe. This was our very first Brinkman Family Adventure! As a girl, I heard the story of Nate Saint and Jim Elliot and the others killed in 1964 in an attempt to share the Gospel with the Waodanis.

Ever since I was a child, these people have been my heroes. 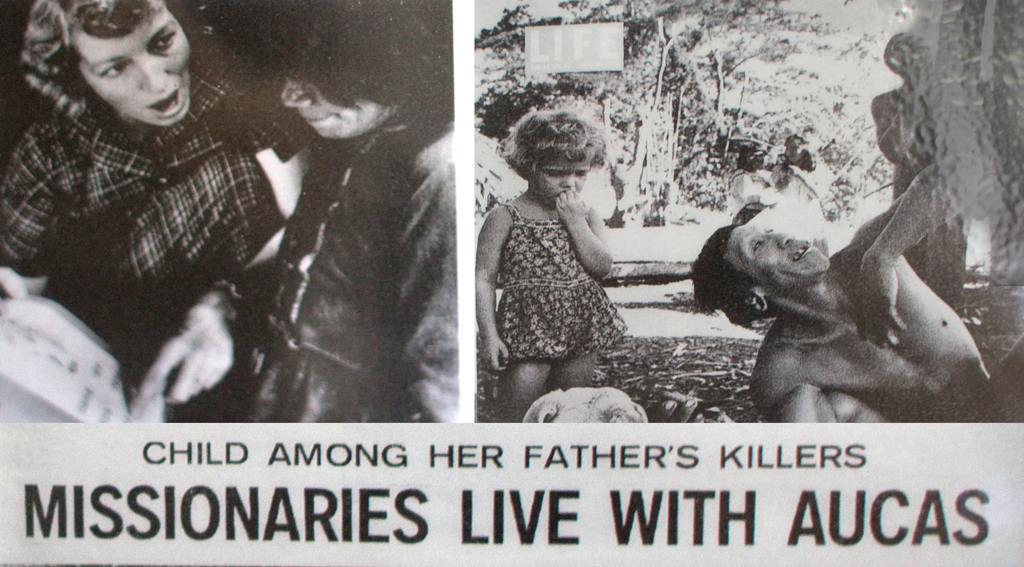 Each person in the story demonstrated powerful faith and love. The five men who gave their lives, the woman who forgave the killers and marched into the jungle to live with them, the Waodani who received the Gospel and were brave enough to change. Each were pioneers of forgiveness, peace, and faith in a highly violent society.
But what are they doing today?

We were heading to Ecuador to participate in a Wao Vision Trip. The purpose of the trip is to support the Waodani and learn from them as we grow in our understanding of missions. The goal is that our mission strategy would be transformed from one that could unintentionally hurt the recipients, to one that purely transmits the Gospel and empowers local believers to lead.

When we got to Ecuador, we met Jamie Saint who would lead us on the trip.  Jamie’s grandfather Nate Saint was one of the five men killed by the Waodani. When Jamie was a boy, his family moved into the jungle to live with the tribe. Mincaye, the man who killed his grandfather, became like a grandfather to Jaime. 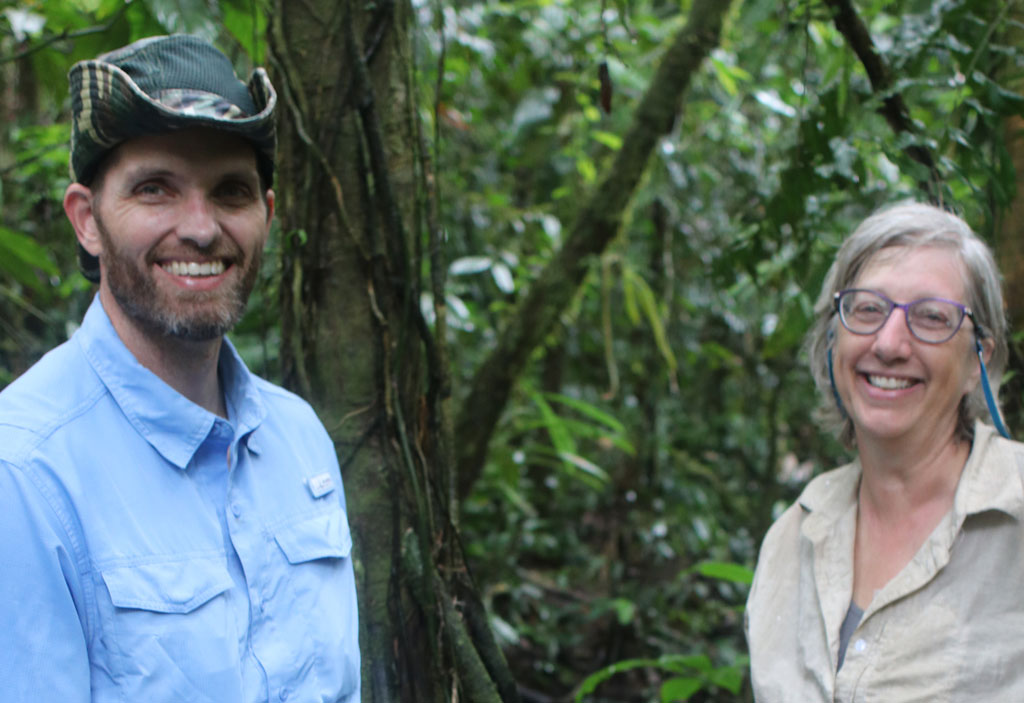 Jamie and Sue in the jungle. Jaime Saint’s family started ITEC, an organization that develops tools and training to equip the indigenous Christ-followers to meet the physical and spiritual needs of their own people.

Jamie helped us consolidate our bags and told us what to expect in the jungle. “It’s dangerous,” he said, “but the Waodoni will take care of us.” He had complete confidence in them.

Grace and Amy departing for the jungle.

As we landed on the bumpy grass-covered runway, we were greeted with hugs and face paint and jungle crowns. Mincaye was not there, but Felipe, his youngest son, helped us off the plane. Felipe, I learned, was in charge of our trip from that point on. Although he grew up in the jungle, he led everything from the spiritual aspects of our experience to the practical issues. 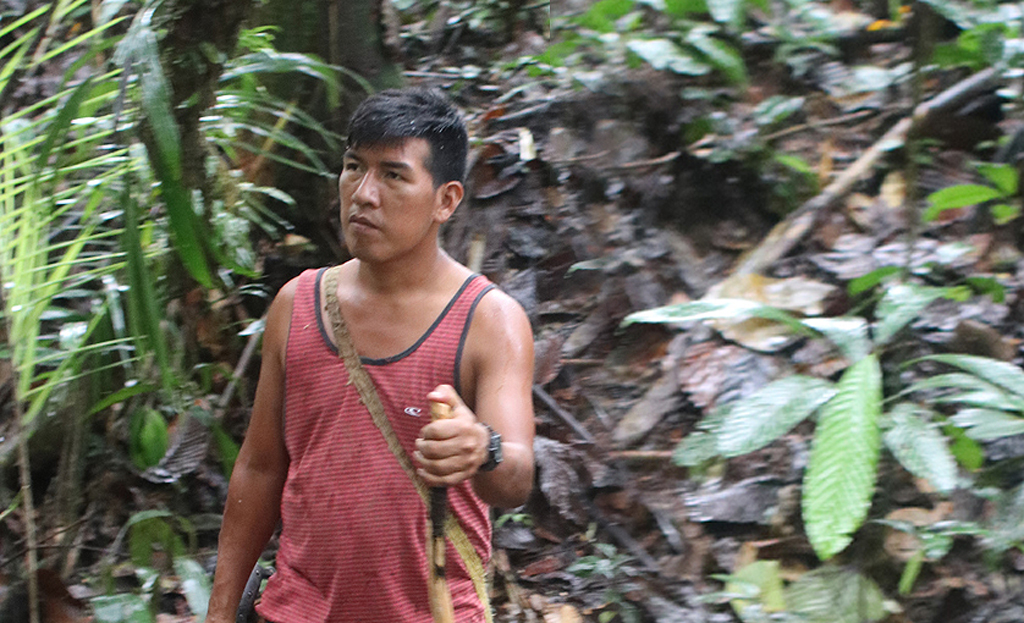 Mincaye’s youngest son Felipe, leading us into the jungle.

Mincaye is now old and has trouble walking. He wasn’t going to join us in the camp but Jamie asked so nicely he couldn’t refuse. They decided he would skip the long hike and arrive by canoe. 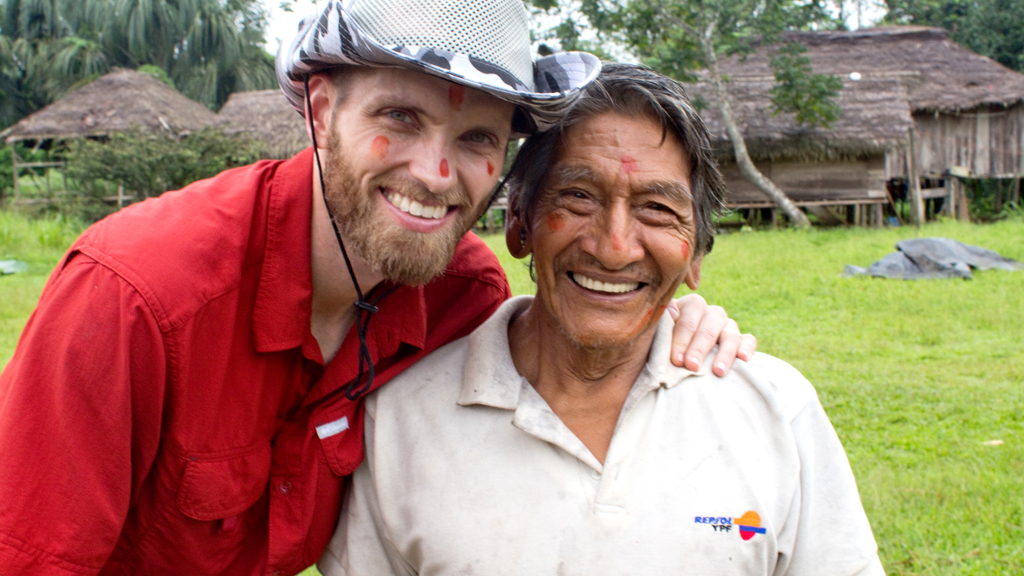 I got a canoe ride, too, and was able to watch the weary hikers arrive. They were amazed, as I was, at the beautiful palm-frond sleeping huts, the neatly organized cooking and eating shelter, the beautiful surroundings, and the surprisingly nice toilets! We all marveled at our handmade hammocks and laughed as we tried to figure out how to use them. And then we settled in.

It’s been a long time since I’ve felt that free. I felt like a kid again! Running around in the jungle looking at flowers and bugs and trees, eating crazy things like turtle eggs, stingrays, and large funny-looking rodents, swinging from vines and planting jungle gardens. 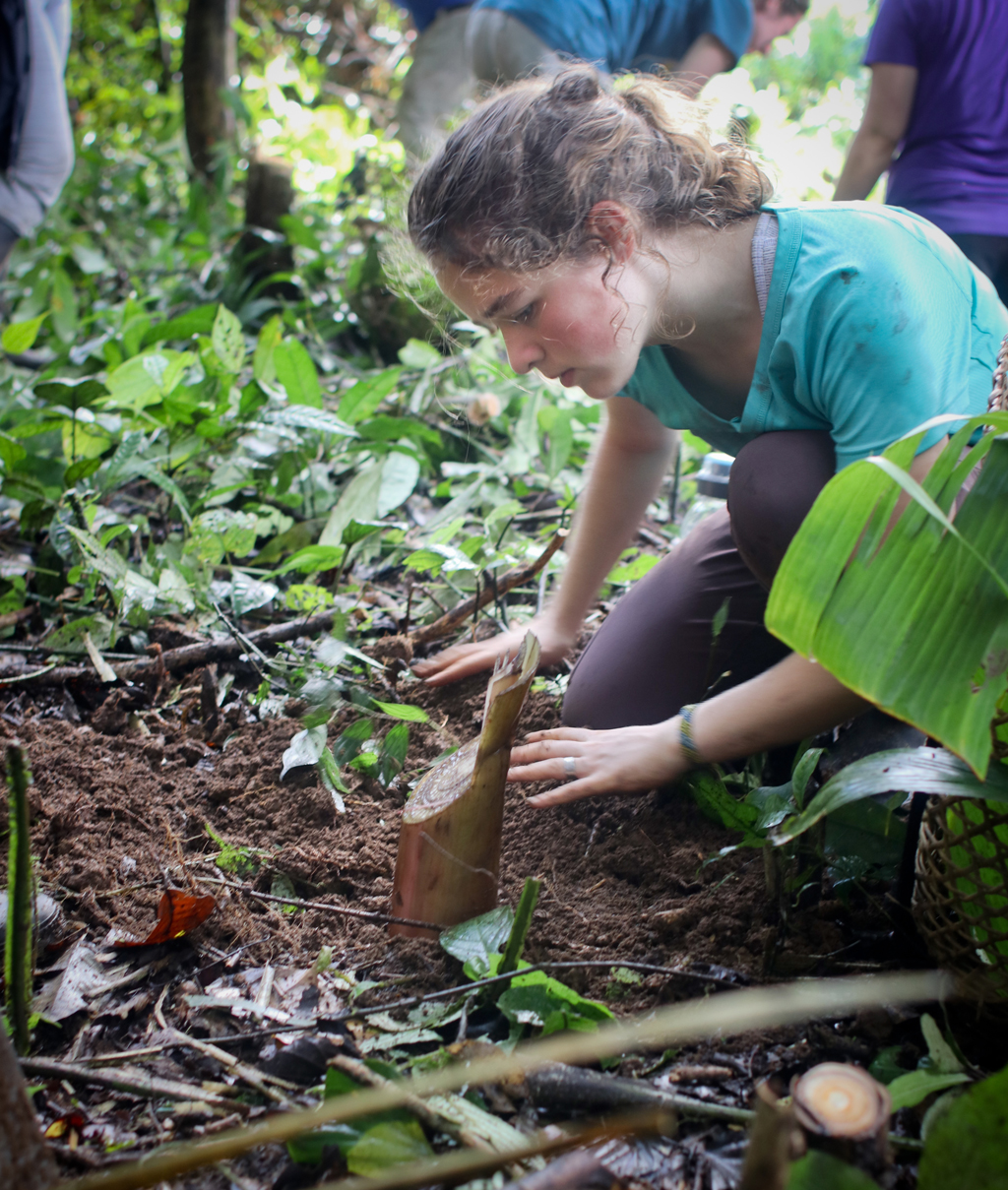 Grace took the cake in Waodoni tree-climbing for her age bracket, and I nearly hit the target with my newly acquired blow-gun skills. The Waodoni taught us how to weave baskets and make spears. They took us hunting and spearfishing and showed us how to cook for 40 people over a fire. We ended everyday washing and playing together in the river. It felt like paradise! I felt so safe and cared for by the Waodoni. (Especially when they knew what to do with the snake in our hut!) 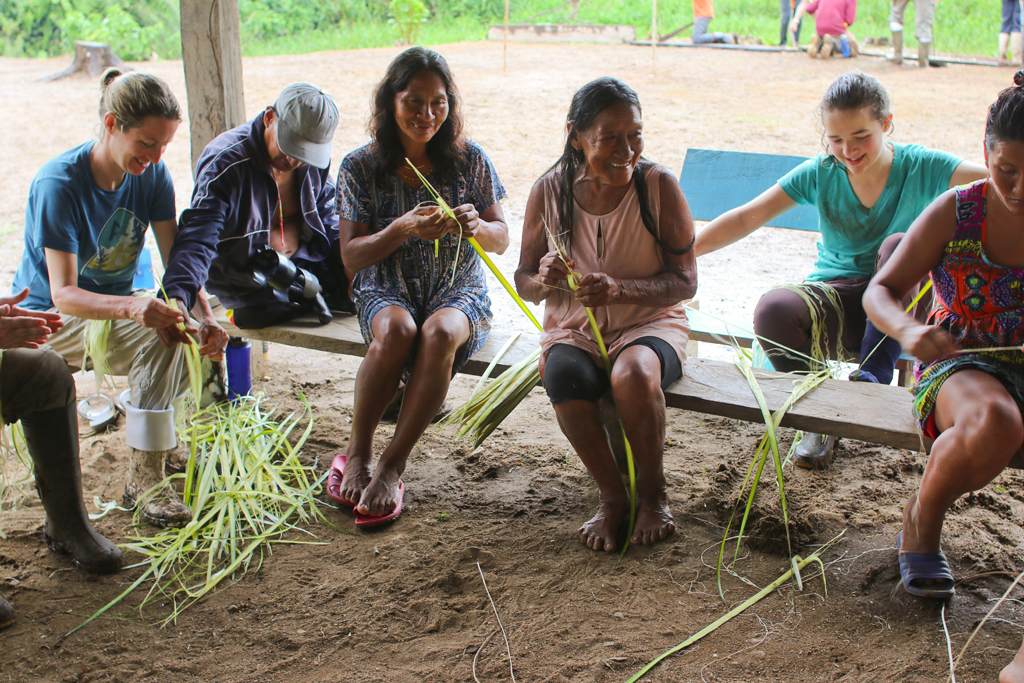 Learning how to make rope and weave baskets from palm branches.

As the Waodani showed us how to survive in the jungle, I began to see that learning from someone creates trust and friendship that doesn’t come any other way. Coming as learners creates an equality that results in everyone knowing they have something to offer.

Jaime told us that, as missionaries we can unintentionally give the impression that we think we know the best way to do things. This often creates a hierarchy that keeps us in the driver’s seat and causes the local people to feel that they don’t have anything to contribute. We may serve and share the Gospel, but are we not able to transfer the gift and responsibility of fulfilling the Great Commission to them? 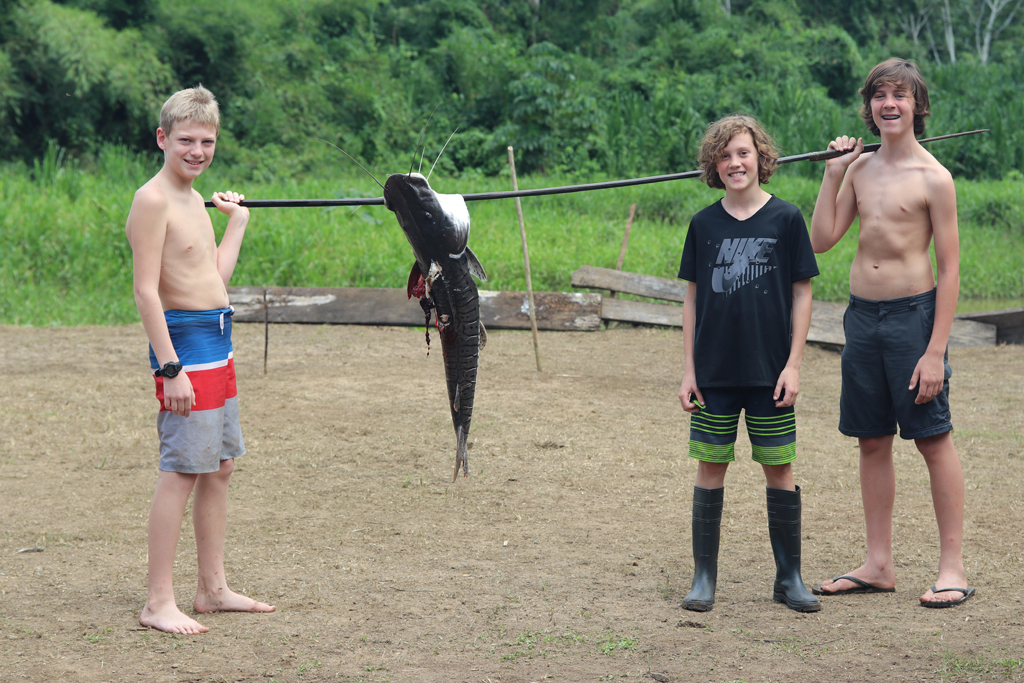 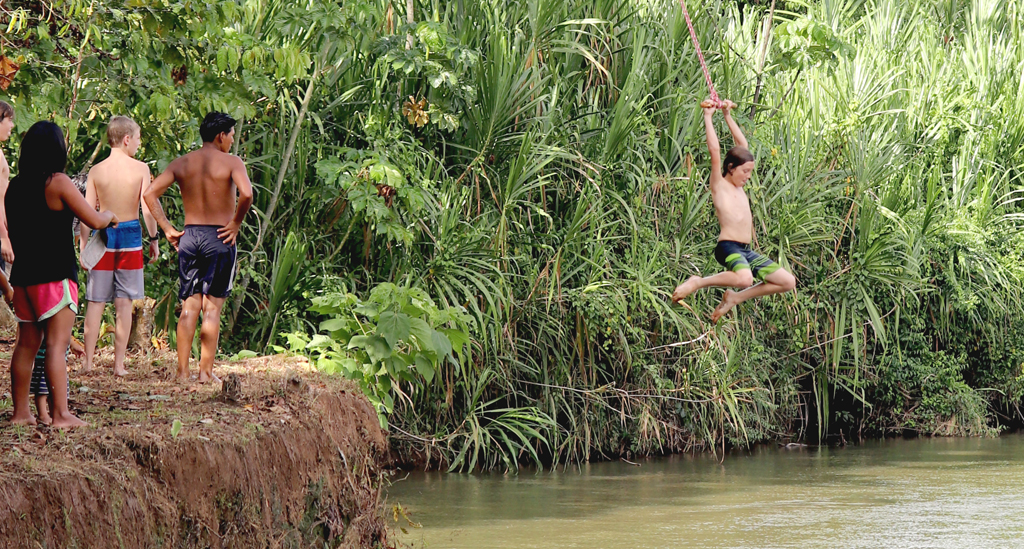 Playing in the river

At night, Felipe led us in a time of worship and storytelling. Mincaye’s sweet wife told us about the transformation of their tribe. We heard about the terror of constant killings. They lived in sorrow, loss, bitterness, anger and fear. I looked into the jungle, growing close around us, and realized that this beautiful place never used to feel safe. The wonder and safety was a radically new experience for this generation of Waodani! The Gospel has transformed their entire existence.

As the days went on, I saw how Jamie intentionally held back and let Felipe lead everything. This caused Felipe to take complete ownership of all aspects of life in the jungle, from the spiritual development of his tribe to the care and upkeep of the camp they created for us. These trips were Felipe’s idea and have brought in the finances to care for their elderly, enable medical flights and fund mission endeavors.

At night, around the fire, my eyes filled with tears as I listened to Felipe, Mincaye’s youngest son, tell of his plans.
“I want to go deeper into the jungle,” he said, “There are villages out there where people don’t wear clothes. They have never been reached with the Gospel. We are making plans to go.”

The slow cultivation of relationships and careful discipleship done by Jaime and his family has allowed people of the most marginalized group in Ecuador to stand up and forge ahead into the hard places for the Gospel. 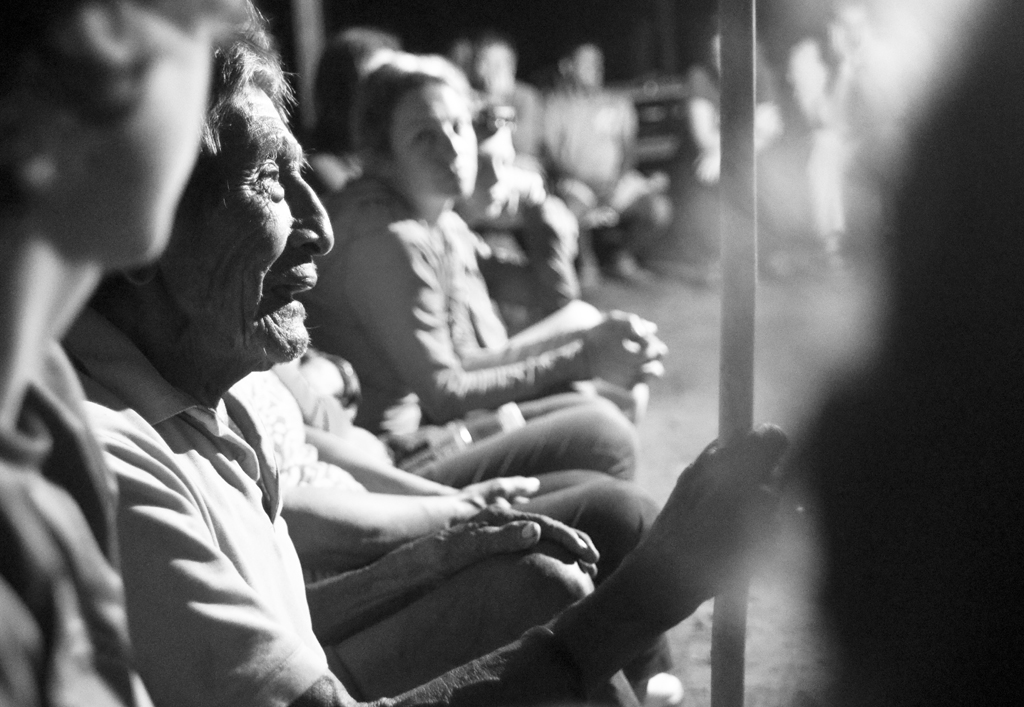 Mincaye and his wife sharing their story

As I listened to Felipe, it hit me. This is the way to do it! We must empower local believers to enter into the beautiful work of bringing the Gospel to their people. It may take longer and look a little different, but this is God’s way. It is the fullness of discipleship. We are to make disciples that make disciples.

I thought about the people back home that I have been reaching out to. Have I been taking the time to listen and learn from them in a way that builds relationships and trust? Have I been giving off the impression that I know everything and don’t believe they have anything to offer? This has challenged me. I want to be vulnerable and learn from people as I share with them. I want to be bold and go to hard places in conversation to share the Gospel.

As Grace and I passed over the rippling water in the canoe ride out of the jungle, I felt a deep sense of gratitude. It was a profound honor to have met those heroes of the past. I felt excited for the journey that lay ahead for Felipe and the new Waodani leaders. 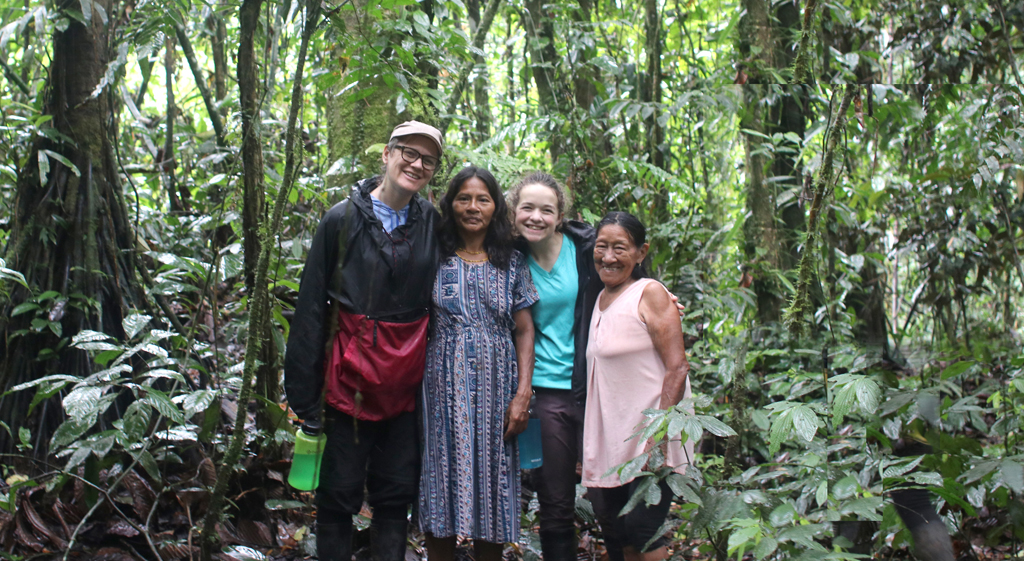 Grace and I meet some of my heroes

I left excited for my own journey as well.
Let’s be leaders who listen and learn; leaders who intentionally empower others.
May we enable others to boldly take their place in the sacred mission of making His name known to the very ends of the earth.