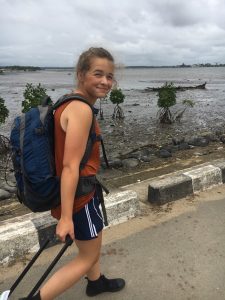 Hey! My name’s Grace and I play Gracie Brinkman in the Brinkman Adventures. This past August, my Dad and I took an amazing trip to Papua Indonesia. It took us six flights, and two boat rides to reach our final destination, which was Kri Island.  We went there to record two of our upcoming episodes (that will come out early December) about the Wild family who are missionaries working on translating the Bible there. This trip has been a huge blessing to me and one I won’t forget.

We arrived safely August 4th on a Sunday night. The next morning we took a fifteen-minute hike up to a helicopter 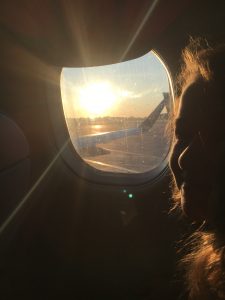 hanger and started putting together our makeshift studio in a side room. The room we used had AC to prevent the helicopter parts from rusting, which was super nice. Then we went down again to bring up some mattresses. Okay, correction, the Wild brothers brought them up. 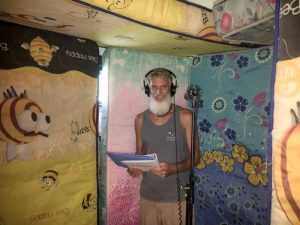 We then officially named it Bee Happy Studio (see picture) and buckled down and started recording. That’s when my job came in, logging. I wrote down all the times and script changes while we recorded line by line. This would later help my brothers, who would piece it all together when we got home. The Wilds were really fun to work with, and they all did a great job. We had their lines finished by Friday.

The next day God provided us with Jerome (our really good cook.)

He was able to play two of our pivotal characters. He did an extraordinary job! And we also recorded some extras, Pu and his mom Ira and Muston who were also awesome! That left us with the photoshoot which we wrapped up by Saturday morning. 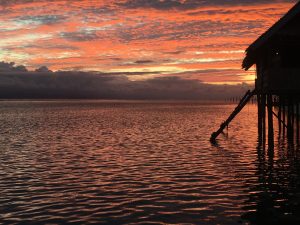 Kri was …remarkable. I never knew the world was so beautiful, and I know now, how ungrateful I can be for taking this world for granted, and I don’t want to do that anymore. I have also learned how selfish I can be. There are people out there that haven’t even heard of God. They don’t know He made this fascinating world or that He loves them; they don’t know all that. And here I am worrying and complaining about math?

Being there really showed me what and Who to put my focus on. 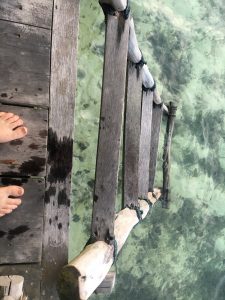 And even though I’ll still hate math, I know now that there are more important things to do than to complain about it.

I hope you enjoy these episodes come December as much I enjoyed helping my family make them. Also, I encourage you to look up the Wild Brothers from Answers in Genesis. They have some really cool stories and videos and have inspired me in so many ways.